Q. Have you ever stumbled across a valuable rare find at a garage/yard sale or a secondhand store and knew you were getting too good of a deal? If you bought it, did you feel guilty and tell the other party what you found was worth at some point?

During a vacation in Bermuda, my wife and I stopped at an estate sale at a waterfront mansion, but the sale was not at the main house. It was being held at the gate house, where their former chauffeur lived. It was a three day sale and we arrived shortly before closing on the last day. There appeared to be nothing of interest left.

While my wife was fumbling through some worn out kitchen utensils, (5 for $1); I noticed a large modern art oil painting. It was weird as usual. The price, ($2.50), caught my eye. I thought, “that’s a lot of ugly for the money.” I considered how I could kick the painting out of the frame and cut the wooden frame down to a usable size. While I pondered this possibility, I noted the signature and date.

Andre Beaudin, 1938. The name meant nothing to me, but the date made me wonder, “how many artists were doing modern art in 1938? My ignorance was manifest. I later learned the 30’s was the heyday of modern art. I paid the $2.50 and didn’t argue about the price. I asked the person handling the sale what was known about the painting. She said it was a gift from the artist who had been a summer guest of the former owner of the estate.

When I got home, I looked the artist up. Andre Beaudin once shared an exhibition with Pablo Picasso. He was, “one of the leading painters of the Ecole des Art Decoratifs in Paris and had an exhibition at Galerie Percier. The success of this show lead to further shows over the next few years at Galerie Georges Bernheim and Galerie Simon. “In 1937 he exhibited at the International Paris exhibition.” “By the 1940’s he established an international reputation. He is represented in numerous museums of modern art.”

Some of his paintings have brought in excess of $30K. 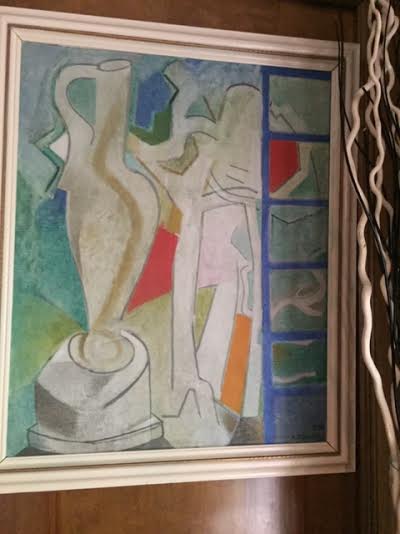 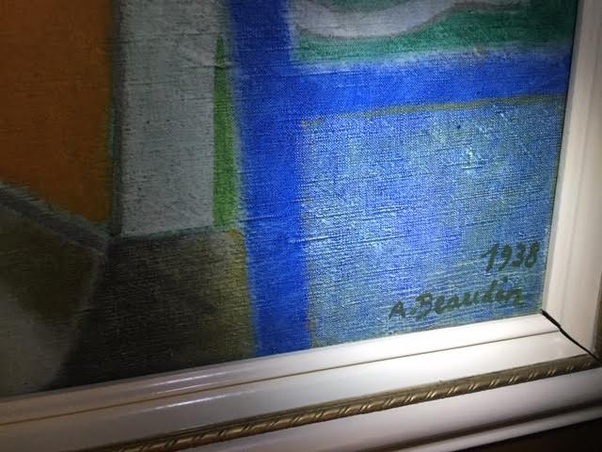