Q. Why are predators afraid of honey badgers? 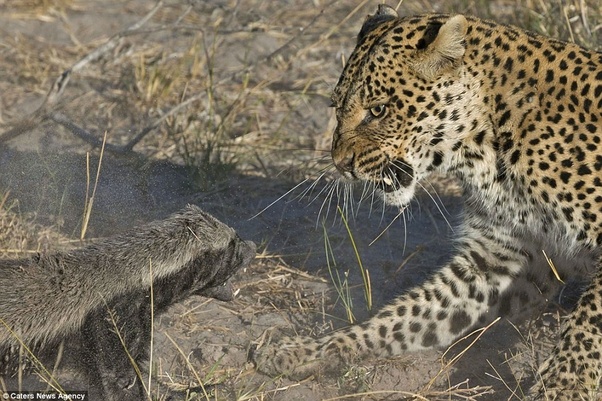 The world’s most fearless creature is the Honey Badger, according to the Guinness Book of World Records.

Honey Badgers have many reasons to be fearless. They have very thick (about 1/4 inches), rubbery skin, which is so tough that it’s been shown to be nearly impervious to traditionally made arrows and spears. Further, their skin can take a full blow from a sharp machete without necessarily cutting the skin all the way through. More practically, this skin helps protect the Honey Badger from the teeth of predators.

Along with being thick and very tough, the Honey Badger’s skin is also fairly loose, which allows it quite a bit of freedom of movement within the skin. This particularly aids it when it’s being attacked by larger predators and finds itself in the predator’s clutches. It can then squirm about in its skin and get its long claws and mouth with sharp teeth in such a position to harm the predator that is holding it. This makes it particularly unsafe for an animal to hold the Honey Badger in its jaws, unless it kills it instantly, which is difficult. The Honey Badger can simply squirm around and viciously attack the creature’s face and eyes. While the Honey Badger might ultimately die in such an encounter. The animal that killed it will likely think twice before attacking another Honey Badger. It turns out, there is almost no safe place to hold a Honey Badger without it being able to get itself in a position to attack you. It is thought that if you managed to grab the Honey Badger by the back of the neck and hold it at arms length in the air, that this may be a safe way to hold one, but not a lot of volunteers are out there to test this theory.