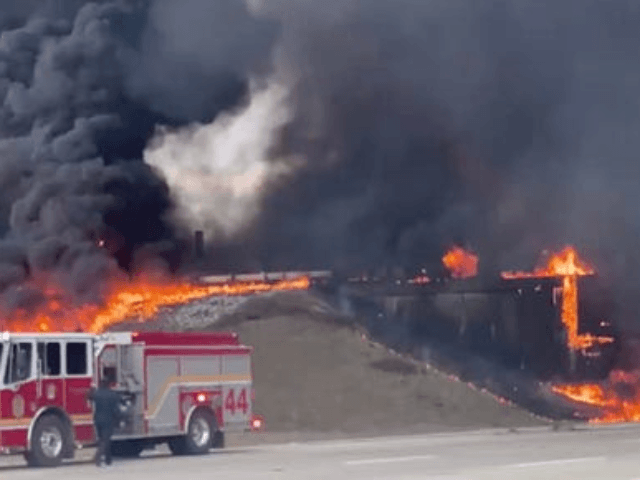 A woman who delivered her own baby in the emergency room on Monday wound up saving a truck driver’s life from a fire on Thursday, just days after she gave birth.

Holly McNally says that despite welcoming a newborn baby into the world before her doctor showed up earlier in the week, it did not stop her from helping a man covered in flames after his truck full of jet fuel overturned on an Indianapolis-area highway on Thursday.

“It’s human nature to not run towards danger,” she told People. “But for me, it was the opposite. I was like, ‘I brought a life into this world, and I get to go home and see my baby and this man could be somebody’s dad or somebody’s child and I want him to make it home to his baby too.’”

The incident took place shortly before 2 p.m. on the I-465 South ramp heading toward I-70 East, the Indianapolis Fire Department tweeted.

The 35-year-old mother said she was on her way home from the hospital visiting her newborn son in the NICU when she spotted the fiery crash.

McNally said she pulled over, got out of her car, and noticed a man engulfed in flames with his “head on fire, hands on fire.”

It was at that moment when McNally decided to do something.

“I asked him what he was hauling and he told me jet fuel and I was like, ‘Honey, we’ve got to get out of here. I’ve got a newborn that I want to get home to and I’m sure you have family that you want to get home to,’” she told People.

Another Good Samaritan— identified as Mitch Navarre, 50— also showed up to help McNally at that time.

The three worked quickly to get the man down the ramp away from the burning fuel. Both Good Samaritans were able to get the victim to safety and into the hands of first responders. He was eventually transported to a local hospital in critical condition, USA Today reported.

McNally, reflecting on her whirlwind of a week, credited being in the right place at the right time, and being a mother to three other children for getting her through the week’s challenges.

The mother of four also hopes her story will inspire others to perform acts of kindness, even if it is something simple.

“Everybody should help each other out, and we should be there for other people, even if it’s doing something little like giving someone a dime that they’re short,” McNally said. “Kindness goes a long way. It doesn’t have to be saving somebody’s life, but anything that you can do for someone to help them in any way, make sure you do it.”