For pet-owners, coming home to discover your pet has been caught red-handed, sometimes red-faced, doing something they weren’t expecting you to witness is a common occurrence. However, one poor goldfish in South Africa could have done with their owner arriving home just a few minutes earlier.

A tour guide named Jérémy Schalkwijk was reportedly on a date when he decided to take his companion home and show her his pet goldfish (yes, this is a new one for us too). Unfortunately, Cleo the fish was not in the pond where Schalkwijk expected to find it but instead hovering mid-air, halfway up a wall in the clutches of a spider – who clearly hadn’t expected anyone to come home, and was probably wishing they’d arrived just a few minutes later. 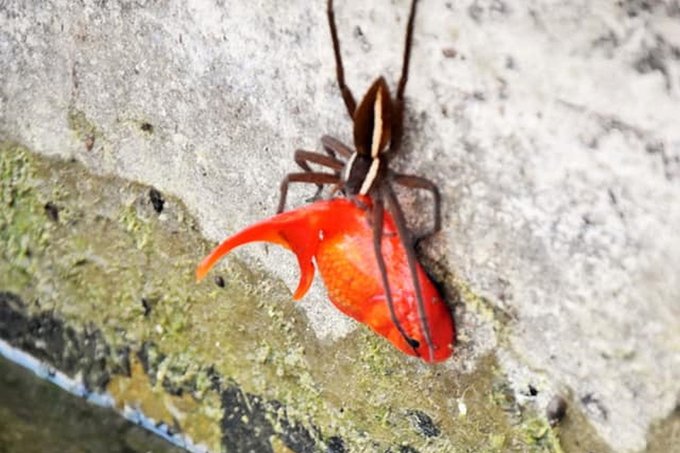 Schalkwijk was stunned to watch the nursery web spider lower itself into the pond, grab the fish with its fangs and front legs, and haul it out of the water and up the wall, reports Live Science.

And it wasn’t a tiny goldfish either. By the looks of things, Cleo was a little on the portly size. Schalkwijk estimated the fish was about twice the spider’s weight.

Nursery web spiders occur just about everywhere except extremely dry or cold regions. They can walk on the surface of still bodies of water and even dive below to hunt or escape predators. They can jump too, about 15 centimeters (6 inches).

Schalkwijk rushed back to show his date the amazing shots and when they both approached the pond again, neither fish nor spider were to be seen.

In the spider’s defense, it was just doing what spiders do. At least Schalkwijk understood that he was witnessing a sight not often observed by humans and immediately started snapping photos (Cleo may have been questioning his priorities about now). It is unlikely he could have saved the fish, even if he’d attempted it, as nursery web spiders have venom strong enough to kill small prey.

In fact, before you write them off completely, nursery web spiders get their names because the single-parent females carry their eggs around with them in sacs they hold with their fangs, until they build nursery webs for them, sheltering them until they are old enough to leave on their own – which seems pretty awww, until you know why daddy spiders are not in the picture.