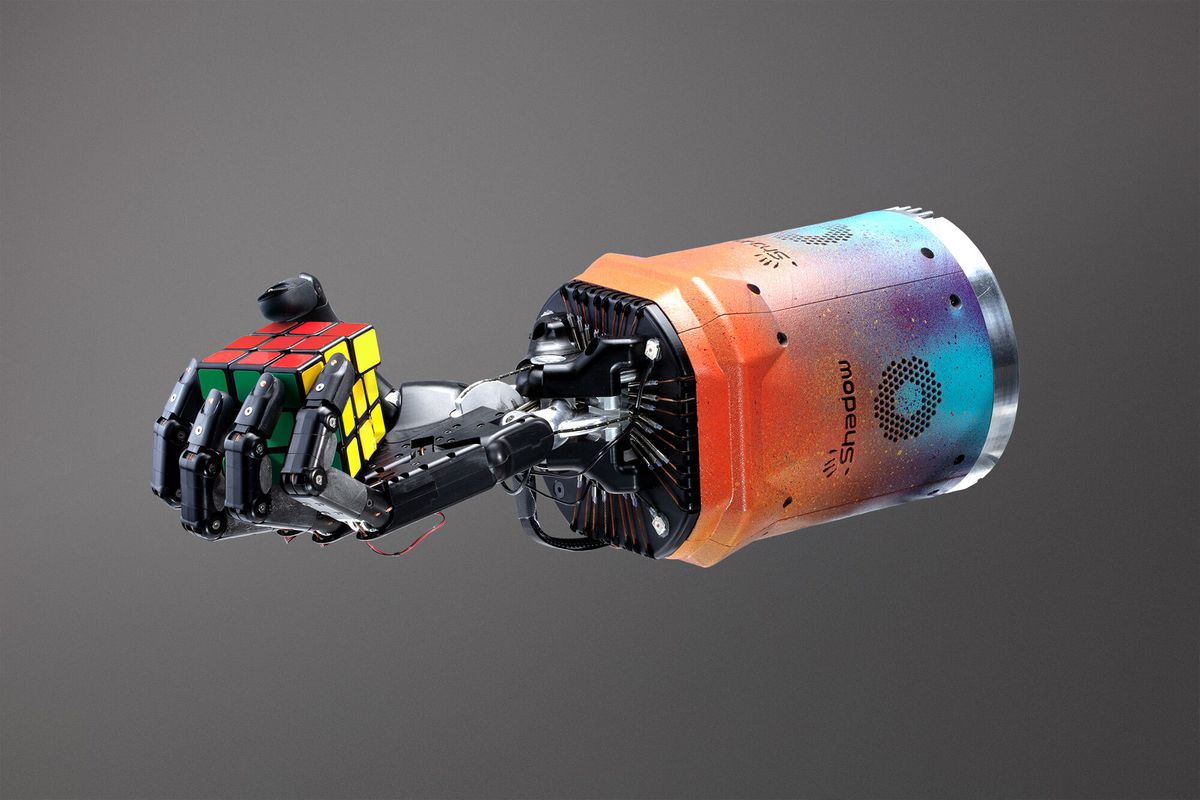 Artificial intelligence research organization OpenAI has achieved a new milestone in its quest to build general purpose, self-learning robots. The group’s robotics division says Dactyl, its humanoid robotic hand first developed last year, has learned to solve a Rubik’s cube one-handed. OpenAI sees the feat as a leap forward both for the dexterity of robotic appendages and its own AI software, which allows Dactyl to learn new tasks using virtual simulations before it is presented with a real, physical challenge to overcome.

In a demonstration video showcasing Dactyl’s new talent, we can see the robotic hand fumble its way toward a complete cube solve with clumsy yet accurate maneuvers. It takes many minutes, but Dactyl is eventually able to solve the puzzle. It’s somewhat unsettling to see in action, if only because the movements look noticeably less fluid than human ones and especially disjointed when compared to the blinding speed and raw dexterity on display when a human speedcuber solves the cube in a matter of seconds.

But for OpenAI, Dactyl’s achievement brings it one step closer to a much sought-after goal for the broader AI and robotics industries: a robot that can learn to perform a variety of real-world tasks, without having to train for months to years of real-world time and without needing to be specifically programmed.

“Plenty of robots can solve Rubik’s cubes very fast. The important difference between what they did there and what we’re doing here is that those robots are very purpose-built,” says Peter Welinder, a research scientist and robotics lead at OpenAI. “Obviously there’s no way you can use the same robot or same approach to perform another task. The robotics team at OpenAI have very different ambitions. We’re trying to build a general purpose robot. Similar to how humans and how our human hands can do a lot of things, not just a specific task, we’re trying to build something that is much more general in its scope.”

Welinder is referencing a series of robots over the last few years that have pushed Rubik’s cube solving far beyond the limitations of human hands and minds. In 2016, semiconductor maker Infineon developed a robot specifically to solve a Rubik’s cube at superhuman speeds, and the bot managed to do so in under one second. That crushed the sub-five-second human world record at the time. Two years later, a machine developed by MIT solved a cube in less than 0.4 seconds. In late 2018, a Japanese YouTube channel called Human Controller even developed its own self-solving Rubik’s cube using a 3D-printed core attached to programmable servo motors.

In other words, a robot built for one specific task and programmed to perform that task as efficiently as possible can typically best a human, and Rubik’s cube solving is something software has long ago mastered. So developing a robot to solve the cube, even a humanoid one, is not all that remarkable on its own, and less so at the sluggish speed Dactyl operates.

But OpenAI’s Dactyl robot and the software that powers it are much different in design and purpose than a dedicated cube-solving machine. As Welinder says, OpenAI’s ongoing robotics work is not aimed at achieving superior results in narrow tasks, as that only requires you develop a better robot and program it accordingly. That can be done without modern artificial intelligence.

Instead, Dactyl is developed from the ground up as a self-learning robotic hand that approaches new tasks much like a human would. It’s trained using software that tries, in a rudimentary way at the moment, to replicate the millions of years of evolution that help us learn to use our hands instinctively as children. That could one day, OpenAI hopes, help humanity develop the kinds of humanoid robots we know only from science fiction, robots that can safely operate in society without endangering us and perform a wide variety of tasks in environments as chaotic as city streets and factory floors.