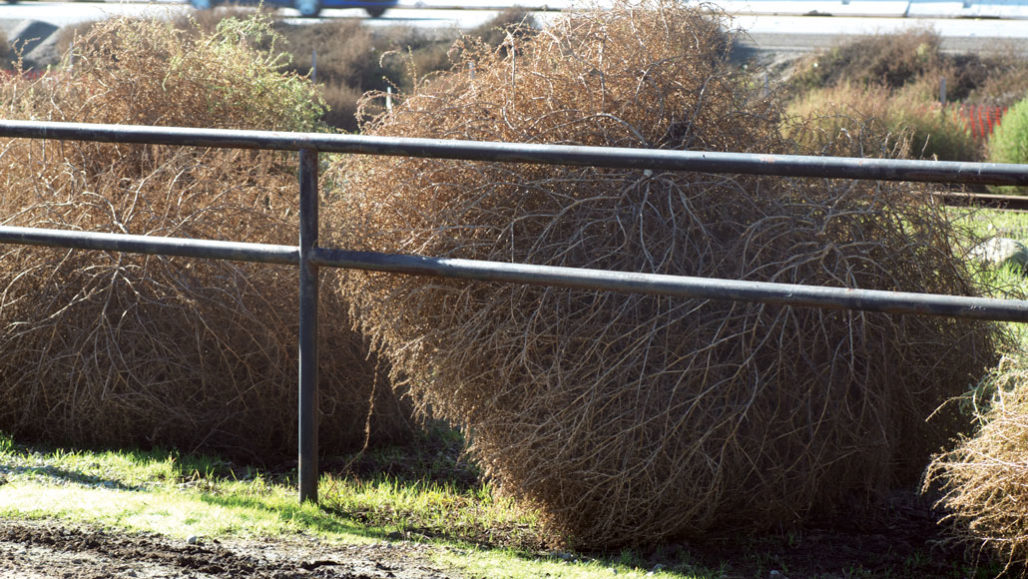 Those dried-up, gray and brown tangles of Salsola plants have blown through many a Western movie, but they aren’t all that Western. You can find the common S. tragus in Maine, Louisiana, Hawaii and at least 42 other states. What’s more, S. tragus isn’t even native to North America, says evolutionary ecologist Shana Welles of Chapman University in Orange, Calif.

When the plant arrived on the continent over a century ago, it wasn’t welcome. An 1895 agricultural bulletin blames the accidental arrival on “impure” flax seed brought from Russia to South Dakota during the 1870s. From there, the adaptable S. tragus rode the rails, surviving a range of climates and really thriving in places like California’s Central Valley. Welles, who is 5’8”, says, “I definitely have stood next to ones that were taller than me.”

The plants are more famous dead than alive. Even Welles, who did her Ph.D. on tumbleweeds, says, “the flowers look like almost nothing.” The lentil-sized fruits, however, have a certain botany-geek charm. Each one grows papery, sometimes pinkish flares of tissue called fruit wings.

A single S. tragus plant can create more than 100,000 of those fruits, which are crucial to understanding the big hairball-like tangles. When fruits and seeds form, the plant grows a “break here” tissue layer that weakens the stalk at the base. Wind eventually snaps off the whole branching architecture to blow where it will. “There is no living tissue of the mother plant when it’s tumbling,” Welles says. A tumbleweed is just a maternal corpse giving her living seeds a chance at a good life somewhere new.

In its North American home, S. tragus has had some improbable offspring. Never mind that the other parent of some of those progeny is S. australis, a different species with only half as many chromosomes. (It hitchhiked to the continent from perhaps Australia or South Africa.) Mismatching chromosome numbers can be a deal breaker for animals looking to mate, but plants have their ways. When tragus met australis, the latter just added an extra copy of all its DNA and the numbers worked out. Instead of a dud, a new species, S. ryanii, was born (SN: 4/12/16).

Welles wondered if the newbie plant was a super-tumbler. Biologists have predicted that such hybrids should have extra vigor in terms of plant growth. Maybe. In one of two years of experiments, the cross-species tumbleweeds averaged 5.8 kilograms of greenery versus roughly three kilograms for each parent, Welles and geneticist Norman Ellstrand of the University of California, Riverside reported online July 13 in AoB Plants. These tumbleweeds and their bold genetics may be less at home in tales of the gunslinger West than in a sci-fi opera of romance at first contact.